Construction of Calvary Presbyterian Church began in 1917, with an addition for a school/classrooms added in 1939.  From the time its doors opened, the congregation continued to grow, almost tripling in size through the 1940’s.  However, similar to many churches in Detroit, the congregation began fleeing to the suburbs and the church attendance began to steadily decline.  Over the next few decades, the membership dwindled down to unrecognizable numbers.  It was proving difficult to acquire sufficient revenue to continue maintenance of the facility.

Eventually Calvary Presbyterian was forced to relocate to another smaller building.  Sometime after they vacated, Abundant Life Christian Center purchased the building.  However the new residents did not stay long, soon moving out and into another facility close by and the church was once again renamed to Greater Faith for Deliverance Church.  Greater Faith operated here until March 2009 when an unfortunate fire broke out in the attic of the church.  Apparently the congregation had every intention of fixing the damage caused by the fire, however while they were waiting for insurance money to be dispersed, scrappers began to pillage the building.  Stripping the facility of all metal, stained glass windows, copper wiring, and even radiators.

For the last 5 years, the building has been anything but secure.  When we arrived at the location, we simply strolled right in, through doors that were wide open.  Windows have been stripped bare, exposing the once vibrant sanctuary, to the harsh and extreme elements of Detroit’s weather.  When this happens to an abandoned building, it expedites the decaying process – which provides us, urban explorers with magnificent peely paint [that we all love so much]. 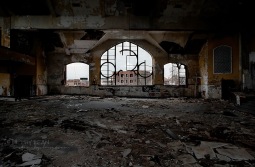