The abandoned Mill was built in 1922 to process local gold and silver ore, using a cyanide solution and specific process which incorporated (a separation technique for removing gold from a cyanide solution). The Mill operated for only 4 years, closing in 1926 and processing $7.5 million worth of silver and gold.  Over its short life, the Mill was owned by two different corporate entities and at the time, was considered the largest, most modern and sophisticated mill of its type in the U.S.

The Mill was shut down due to metallurgical problems and the dropping price of silver. When the Mill closed, all of the equipment, consisting of metal and wood materials, were scrapped and salvaged. During the salvaging process, little care was taken in the removal of equipment and other materials. Concrete structural components were cut and broken as required to facilitate the removal process, resulting in a great deal of damage. Large holes and voids were left in the concrete, reinforcing steel was cut, and concrete structural members were broken. Today only the deteriorated concrete skeletons of the structures remain.  The existing buildings consist of decaying/crumbling concrete, exposed reinforcing steel and large holes in the cement floors.

In 1996 a fatality occurred inside one of the structures when an individual attempted to maneuver up a set of stairs with an all-terrain vehicle (ATV). In response, the BLM (Bureau of Land Management) officially closed the interior of the buildings to public entry on January 21, 1997.  Since 1998, the BLM has repeatedly fenced, gated, and posted closure signs at the mill site and scarified access roads for public safety, however this site is still visited almost daily by locals with complete ease of access. 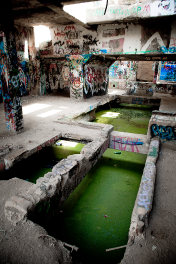 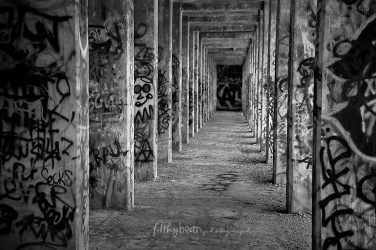