I had been meaning to visit this place for a few years lol (sometimes I lag….) I came across it when it first closed, and then a few times after that, when the graffiti had started to be more apparent.  Well better late than never – I finally checked it out!  YAY!!

All it took was a brisk walk down a side alley, a crawl under a roll up door that was cracked open about a foot, and we were in!  No muss, no fuss!  I do have to say though…the smell that filled my nose as soon as I crawled under that rolling door was like an assault on my senses lol!  It smelled of chemicals and mildew and old food.  It was crazy haha.  The area we entered into seemed to be some kind of warehouse and it was pitch black!  Luckily one of us had a flashlight and we all had a light from our phones.

We made our way through this huge, dark part of the building all the way to the other side, where we were able to walk through some double doors.  We walked around, in and out of this huge building and found some pretty cool things to photograph.  I’d say we were there for about an hour, maybe hour and a half when we ran into a homeless man as we were wrapping up.  He came in, looked at us, stood there and went about eating his hamburger bun.  I finished taking my picture (of the ‘cropping’ negative) and we started heading out.  He tried to talk us into venturing to some concrete, dark part of the building to see some graffiti (which we think was the part we had entered from), but either way, we politely declined and headed out.

It was a super fun day, exploring with my girls 🙂 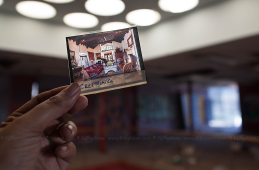 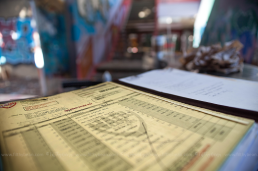 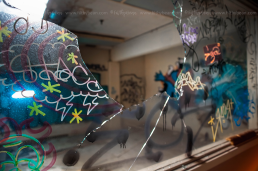 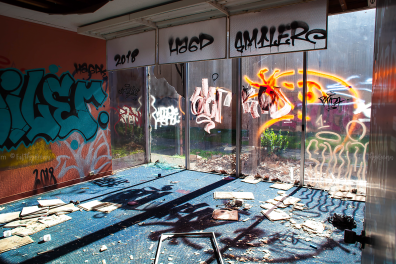 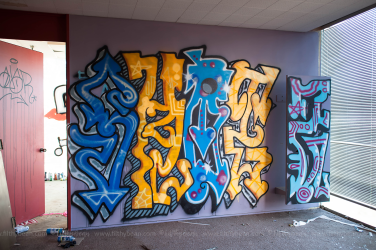 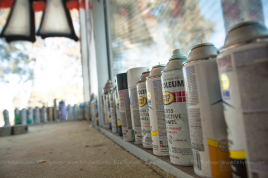 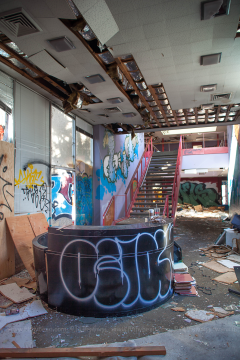 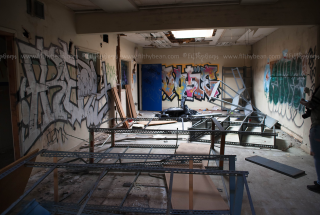 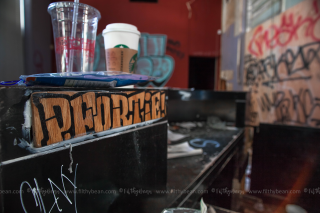 Today we explored an abandoned ‘old county hospital’ and it sure did not disappoint.  It was beautiful – covered in graffiti and decay 🙂  We headed out early in the morning, while it was still dark (as we typically do when we explore).  Along the way, we stopped and grabbed some coffee and a couple of breakfast sandwiches.  It was windy and cold outside.  It was a nice pleasant drive and luckily for us, the old county hospital is directly off of the highway, easy to find and easy to gain entry.

When we parked the car, we strapped on the GoPro and grabbed our camera bags.  We had to walk along the highway for a little bit, then hop over a [knee level] guard rail to enter the property.  We scurried through the brush, which was super overgrown, and entered through an unlocked door.  The hospital had an open floor plan with a courtyard in the middle.  Unfortunately it was full of trash.  It was a nice sunny day so we had lots of light as we walked through the hallways that connect all 4 parts of the building.  75% of the way through our explore, we ran into transient(s) living in one of the back rooms.  We didn’t want to disturb him and for our own safety, decided to leave the premises.  Oddly enough, we scared him and he also left lol.  We saw him riding away on his bike.  Below are a few photographs and snapshots from the GoPro.

LOCATION HISTORY: Even though the site of the old county hospital has long been abandoned, city supervisors were hoping to turn it into an asset for the community.  The building itself has fallen into severe disrepair since it closed its doors back in 2008. 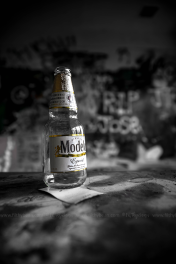 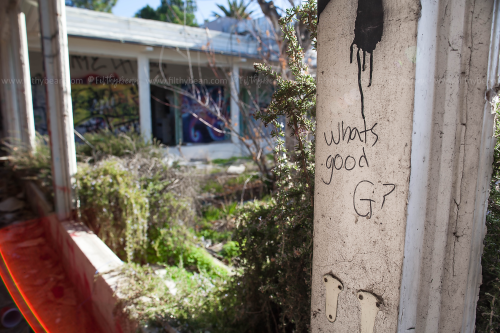 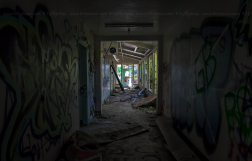 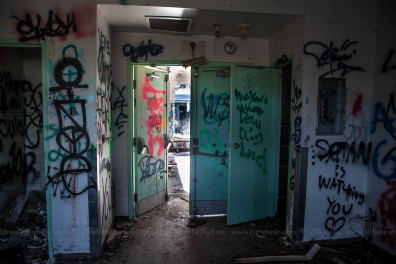 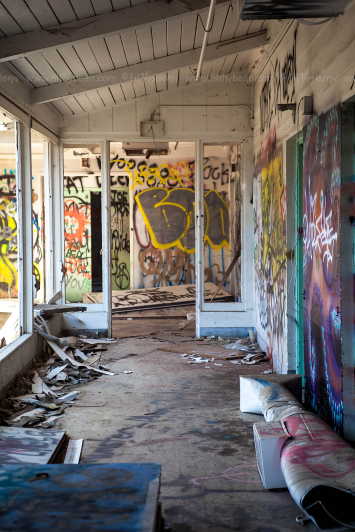 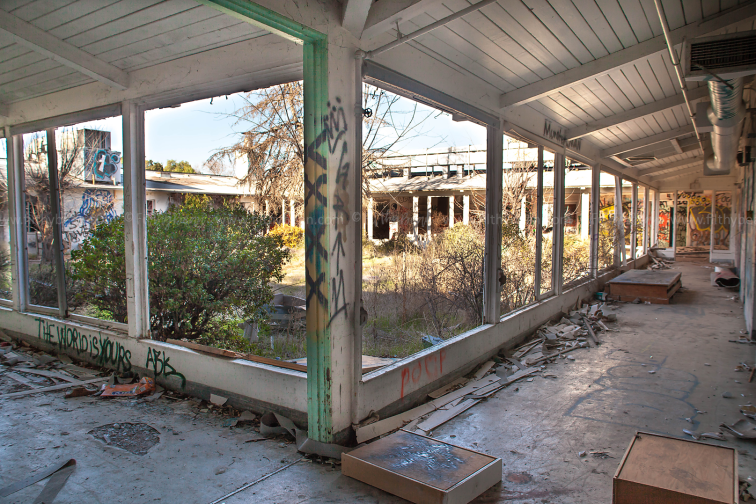 We finally made it out to this little gem in the middle of the desert.  The roadtrip getting here was super fun and we loved every minute of it 🙂  We headed out of town, Friday (early evening) after the hubby got off work.  We decided to leave at night, so that we could sleep in town and then hit the ground running – bright and early!  But like literally….we were up and at ’em before the sun even rose.

When we arrived we strapped on our GoPro’s and our grabbed camera bag/backpack.  Now we were ready to explore this beauty!  Since it was just before 7am and already 80+ degrees, we kinda did a fast paced explore lol.  Below are a few photographs and snapshots from the GoPro.

LOCATION HISTORY: The Lake Dolores Waterpark opened in May 1962. Park attendance peaked in the early 1970’s. However as patron attendance started to decline in the late 1980’s, and the park closed. In 1990 the park was sold, and reopened as Rock-A-Hoola Waterpark on July 4, 1998 – featuring a 50’s & 60’s theme. Over the next 3-4 years the park amassed over $3M debt and an employee who was crippled [in a 1999 accident] was awarded $4.4M in damages. In 2000 Rock-A-Hoola Waterpark filed for bankruptcy. The park reopened as Discovery Waterpark in May 2002 after $400k in renovations were made. Throughout the next few years the park was opened intermittently, finally closing in the summer of 2004. 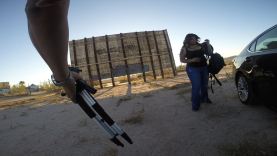 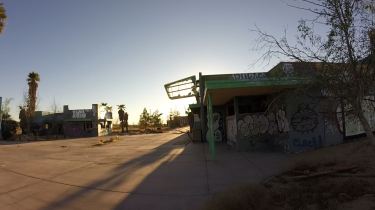 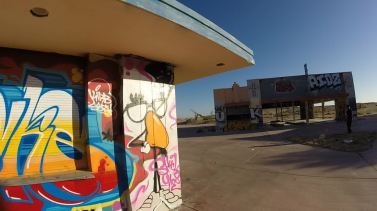 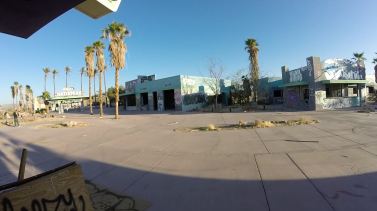 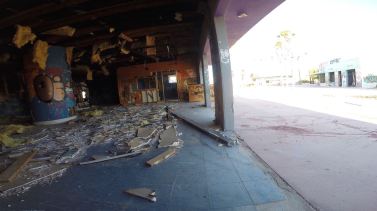